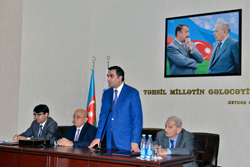 Baku Higher Oil School held a Conference on the Role of the Young in the Struggle against Religious Radicalism.

Mubariz Gurbanli, the Chairman of the State Committee for Affairs with Religious Agencies, Acad. Vasim Mammadaliyev, a well-recognized scholar in Oriental Studies, Gunduz Ismayilov, Deputy Chairman of the Committee, BHOS faculty and students attended the event.

Welcoming the guests Rector Elmar Gasimov expressed his honour of having the opportunity to host them at BHOS emphasising that convening the Conference was essential in terms of awareness raising among the students, facilitating greater respect to the national spiritual values, increasing the tolerance and protecting them from the religious radicalism tendencies. He also briefed about the state religious policy and tolerance underlying the fact that Azerbaijan was a Moslem and secular country.

Mr. Gurbanli spoke about the diverse religious agencies, their activities and the relations between the state and religion underlying that a number of decisive steps were taken to prevent dissemination of negative religious tendencies in the country. Underlying the urgency of the issue Mr. Gurbanli noted that awareness raising activities were essential to ensure protection of the public security.

Speaking about generation of various religions Dr. Mammadaliyev briefed on different religious groups emerged and politicalized based on diverse interest during the history. He emphasized the importance of organizing such awareness raising events regularly in order to protect the country and its young people to come under the control of various destructive religious groups. Underlying the fact the Islam is based on humanity and patriotism principles he called the students not to come under the control of religious radical structures.

The speeches were followed by the Q&A session.