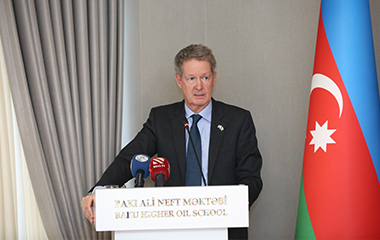 Meeting with the ambassador, BHOS Rector Elmar Gasimov informed him about the history, achievements and educational process of the university. Speaking about cooperation with British universities, the rector noted that Heriot-Watt University played an important role in the creation of BHOS and still remains one of the main partners of the university.

Then Ambassador James Sharp met with BHOS students. The ambassador spoke to the audience about the importance of tackling climate change and its impacts, as well as the commitments of countries to reduce carbon emissions to zero. He noted that the world is getting increasingly concerned about climate change and its impact on wildlife. James Sharp told the students about ways to reduce carbon emissions and measures taken in the world and the UK in this direction. Speaking about the importance of renewable energy sources, the ambassador noted the role of reducing greenhouse gas emissions for ensuring environmental protection and stressed the importance of cooperation in this direction. He reminded that the UN Climate Change Conference (COP26) will be held in Glasgow in November this year, and world leaders will come together at this event to agree on ways to combat the threat of global climate change.

“The British Council and the British Embassy in Baku contribute to the implementation of the goals of COP26 in Azerbaijan by holding relevant events within the framework of various educational and cultural programs. Our main goal is to expand opportunities for dialogue on climate cooperation, to encourage the participation of our youth in discussions on climate change,” James Sharp said.

Speaking about cooperation with Baku Higher Oil School, the ambassador expressed satisfaction with the fact that the meeting with BHOS students is the first of the planned meetings with Azerbaijani youth to be held within relevant programs.

Then, the questions of interest to the students were discussed, and answers were given to these questions

At the end of the meeting, Ambassador James Sharp was presented with a plaque "Guest of Honor" of Baku Higher Oil School.