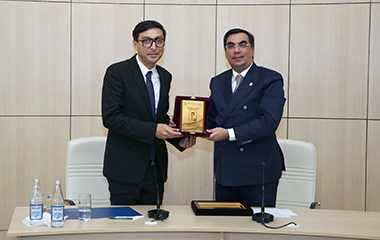 The guest watched the speech of President Ilham Aliyev delivered at the BHOS Congress Hall during the opening of the university campus. He also observed the campus through a virtual 360-degree video system.

The minister also got acquainted with the sports infrastructure of the university, including a swimming pool, tennis hall, fitness center, football field, etc. The rector noted that BHOS has various sport clubs, and that every student is obliged to be a member of one of these clubs.

Watching the training of students in the swimming club, Minister Farid Gayibov highly appreciated the conditions created for sports at BHOS, noting that the university's football and volleyball teams can participate in Azerbaijan’s championship. Elmar Gasimov said that the table tennis team of Baku Higher Oil School is also ready to take part in the championship.

Then, with the participation of the minister, a meeting was held with the Presidential Scholars studying at the university, chairmen of student youth organizations, and heads of youth clubs.

At the meeting, Elmar Gasimov congratulated Farid Gaibov on his appointment as minister and wished him success in his work. The rector thanked the minister for devoting time to BHOS and its students, despite his busy schedule. Elmar Gasimov stressed that he was proud that Baku Higher Oil School was the first among all universities to have been visited by Farid Gaibov, after his appointment as Minister of Youth and Sports. The rector noted that Baku Higher Oil School is successfully fulfilling its mission of training highly qualified English-speaking personnel, implementing the motto of President Ilham Aliyev “We must turn oil capital into human capital”, and that BHOS will continue to fulfill this mission with honor.

“The number of students receiving a Presidential Scholarship is growing every year. Of the 102 Presidential Scholars of this year, 33 are BHOS students. This is a record figure in the history of Azerbaijani education,” the rector added. Farid Gaibov, in turn, expressed satisfaction with his visit to Baku Higher Oil School. He highly appreciated the conditions created for students at BHOS.

“The educational process at the university meets modern requirements. I was pleasantly surprised by the conditions created at Baku Higher Oil School. No university has such conditions for sports as here. I am pleased to be in a university with such a highly effective training system and such an infrastructure. I am proud of the successful BHOS students,” Farid Gaibov said. During the meeting, which took place in a warm and sincere atmosphere, the minister answered students' questions and listened to their opinions and suggestions. At the end of the meeting, Farid Gaibov was presented with a plaque "Guest of Honor" of Baku Higher Oil School and a souvenir.