BHOS student: ‘I was impressed by the simplicity and sincerity of the President’ 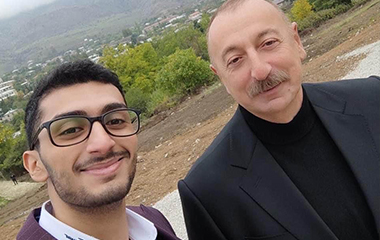 On October 9, President of the Republic of Azerbaijan Ilham Aliyev met with members of the general public of Khojavend district in connection with the first anniversary of the liberation of Hadrut settlement from occupation.  Student of Baku Higher Oil School (BHOS) Oktay Amrahov also attended this meeting.

The family of Oktay Amrahov had to leave Khatai village in Khojavend distict, which was captured by Armenian armed formations during the First Karabakh War, and settled in Baku.

Oktay Amrahov was born in Baku in 2004. He is a first-year student at BHOS majoring in Petroleum Engineering. Oktay is a graduate of secondary school No. 192 in Zabrat settlement in Sabunchu district. He scored 646.4 points in the entrance exams.

Sharing his impressions of the meeting with the President, the BHOS student said that he was so excited during the meeting that he even forgot to give his name.

By meeting with the Supreme Commander-in-Chief, Oktay made his biggest dream come true: “I was impressed by the simplicity, sincerity and benevolence of Mr. President. He warmly greeted everyone and listened to each of us. I also approached the Head of State, shook his hand and said that I was studying at Baku Higher Oil School. The President asked me to convey his regards to the students. For me, as well as for our entire university, it is a great honor to hear kind words from Mr. President”.

Oktay Amrahov said that he chose BHOS on the advice of a teacher who taught him chemistry in high school. Following this advice, Oktay decided to enter the Petroleum Engineering Department of BHOS, and he achieved this target by showing high results in the entrance exams. His goal is to become one of the most successful students of Baku Higher Oil School.