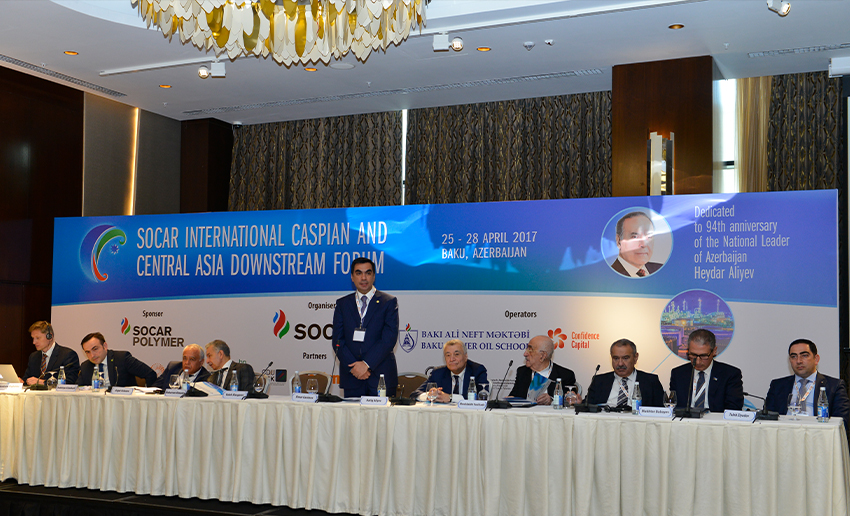 The second SOCAR International Caspian and Central Asia Downstream Forum – Trading, Logistics, Refining, Petrochemicals kicked off in Baku on April 25. The forum organized by the Baku Higher Oil School (BHOS) in collaboration with British company Confidence Capital Ltd and powered by SOCAR is a key event in the Caspian oil calendar covering the latest trends in hydrocarbon exports from the region, providing a unique digest of trading information for strategic decisions and day-to-day operations. BHOS Rector Elmar Gasimov, opening the forum’s first session, emphasized the event’s great importance to the country, saying it facilitates building business ties between professionals from across the globe and effectively advocates the oil strategy implemented under the auspices of President Ilham Aliyev, Azertac reported.

Addressing the conference, Deputy Chairman of the Milli Majlis, Chairman of the Parliamentary Committee on Natural Resources, Energy and Environment Valeh Alasgarov hailed the development of the country’s fuel and energy sector, stressing that Azerbaijan is an example for the Caspian countries in supplying energy resources to world markets. He noted that Azerbaijan has always been a supporter of equal cooperation with the Caspian countries and tried to build this cooperation based on the international experience. “Azerbaijan is the initiator of the delimitation of the Caspian Sea bottom and contributed to the solution of this issue within the framework of international law. Azerbaijan has signed relevant agreements with Russia and Kazakhstan in this area and we hope that other countries will also join these agreements,” he added.

Energy Minister Natig Aliyev, in turn, spoke about the aspects of the modern-day global energy map.

Today the Caspian region, thanks to its enormous potential, acquires special significance in terms of global energy security, the minister said, further stressing Azerbaijan’s special role in promoting Europe’s energy security. “The main feature of the Caspian region is the expansion of mutually beneficial cooperation in the field of trade in energy resources,” he said. The minister pointed to enormous potential of energy exports from the Caspian region in the near future, noting that the prospects can be increased through the implementation of energy efficiency and resource-saving programs in all spheres of the economy, including the production and consumption of oil and gas. "Today, our region, and especially Azerbaijan, which is the most important transport hub in the Eurasian space, together with its strategic partners in the Caspian, Black Sea and Mediterranean regions, is becoming quite a significant driver of global development and cooperation,” the minister said. He also touched upon the questions of implementation and prospects of grand projects in logistics, refining and petrochemistry.

SOCAR's First Vice President for Geology, Geophysics and Field Development Khoshbakht Yusifzade, in his turn, provided an insight into the company’s strategy and plans. As of April 1, some 1,971 billion tons of oil was produced in Azerbaijan, according to Yusifzade. “Of this volume, 971 million tons of oil was produced onshore and one billion tons was produced offshore. It is needed to produce additional 29 million tons to bring the production volume to two billion tons. According to the calculations, we will be able to achieve this Nov. 25, 2017," he said. Fluctuations in oil prices don’t affect the interest of foreign investors in the oil and gas sector of Azerbaijan, said Vitaliy Baylarbayov, deputy vice-president of SOCAR for investments and marketing. “Despite the fluctuations in oil prices, our projects continue to be significant for foreign investors,” said Baylarbayov. He expressed confidence that in the future, direct foreign investment in Azerbaijan’s oil and gas sector will further grow as a result of implementation of the second and third stages of development of the Shah Deniz field, as well as the continuation of development of the Azeri-Chirag-Gunashli oil and gas field. Speaking of the strategic course of development for Azerbaijan’s petrochemical sector, Chairman of Azerkhimiya Supervisory Council Mukhtar Babayev informed the session attendees of the projects currently underway, as well as of future projects in this field. He noted that in the coming year, 2000 tons of carbamide will be produced in Azerbaijan daily. "In addition, in 2018, the daily production of polypropylene will be brought up to 500 tons and polyethylene - 600 tons," he added. As many as 80 percent of polypropylene and carbamide produced in Azerbaijan will be exported, according to Babayev.

The report from Director General of Baku international Sea Trade Port Taleh Ziyadov focused on the operations and prospects of the Caspian’s largest logistics center. He also remarked on the special role of the recently established free trade zone in the Alyat village in the development of the country’s oil sector, and announced that it allowed significantly increasing cargo trade turnover. More than 150 delegates including managers of SOCAR’s units and members of Azerbaijani Parliament as well as high-level officials, industry leaders, analysts, trade and financial experts, top executives, managers and representatives from ministries and transnational oil&gas companies from Georgia, Iran, Kazakhstan, Kyrgyzstan, Russia, Turkey, Turkmenistan, Ukraine and other countries participate in the event. The three-day forum will feature eight plenary sessions.

Registration link for the conference