BHOS student is the best 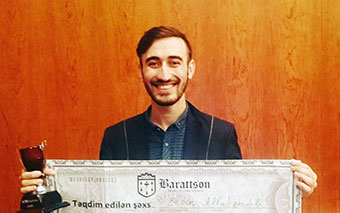 At the final stage, the finalists made presentations for audience and a jury, which evaluated the works. Professional manager, business consultant and advisor Fahri Agayev, Head of the BeSmart.Az company Mushfig Gasanov and Communications Consultant and Public Speech trainer Rashad Bayramov became members of the jury.

Speaking during the stage of the contest, Elchin Allahverdili made a presentation entitled Abortion and Struggle against it and earned the sympathy both of the jury and the audience. He gained the most possible score, came first and became the winner of the contest. Elchin Allahverdili was awarded with Jobs’ Cup, 500-manat education voucher and a special diploma. Speaking at the awarding ceremony, he emphasized that computer knowledge and presentation skills gained during studying the Introduction to IT course for Foundation Students at BHOS significantly helped him succeed in and win the contest.