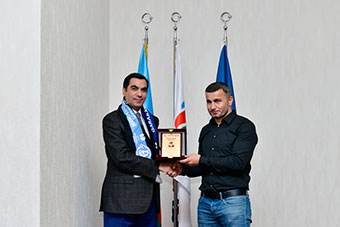 Gurban Gurbanov, a legendary Azerbaijani football player and the Manager of the famous Qarabağ Futbol Klubu (FC Qarabağ), visited Baku Higher Oil School (BHOS). Opening the meeting, the BHOS Rector Elmar Gasimov welcomed Gurban Gurbanov on behalf of the Higher school’s students and academic teaching staff. Speaking about Gurbanov’s competitive career and successes achieved by FC Qarabağ under his management, the Rector said that he belongs to fans of this club whose name is sacred for every Azerbaijani. “Gurban Gurbanov and his team made the name of Qarabağ known to millions of people in Europe and other counties and associated it with glory and victory,” said Elmar Gasimov.

The honorable guest, who was the best player of the Azerbaijani national football team, thanked BHOS management for the invitation and shared his impressions of the school. He said that only educated and talented young people could become BHOS students. Gurban Gurbanov emphasized that high-qualified engineers graduating from BHOS are in high demand in the oil and gas industry of Azerbaijan and wished them success in their study and professional career.

At the end of the meeting, Elmar Gasimov expressed his gratitude to the guest and presented him plaquette as a token of appreciation. In his turn, Gurban Gurbanov presented BHOS Rector with sports souvenirs and keepsakes. Then a group commemorative picture was taken.

Under Gurbanov, Qarabağ has become one of the most successful Azerbaijani football clubs in Europe (with three consecutive wins). Qarabağ Futbol Klubu won the Premier League, their first league title for 21 years, in 2014. Qarabağ have won the Premier league four times and Azerbaijan Cup five times. The achievements in European competitions marked Gurban Gurbanov as among the most successful Azerbaijani managers ever.