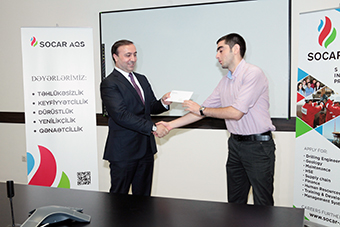 Ibrahim Mamedov, a five-year student specializing in Petroleum Engineering at Baku Higher Oil School, is awarded with SOCAR-AQŞ scholarship designated for the 2016-2017 academic year. He earned the scholarship as a winner of the company’s Student Scholarship Program. Ibrahim Mamedov was selected for his excellent results within last two terms and after a successful interview with SOCAR-AQŞ’ representatives.

He was born in Tovuz in 1995 and graduated from a secondary school in the Alimardanly village of the Tovuz district. In 2012, he was admitted to the BHOS with specialization in Petroleum Engineering after he earned 636 points at the entrance examination. During his years of study, Ibrahim participated in the Summer school organized by BP-Azerbaijan and was awarded with a scholarship from Azercell.