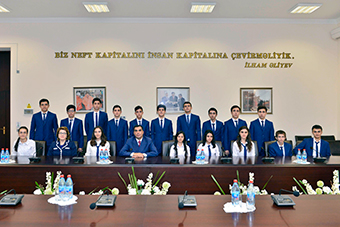 A meeting with 17 students who were admitted to the Baku Higher Oil School (BHOS) this year with high grades and granted with Presidential scholarship was held at BHOS. Opening the meeting, Rector of BHOS Elmar Gasimov congratulated the students. He said that that it is a remarkable achievement and a great honor to be among those listed in the Order of the President of the Azerbaijan Republic Ilham Aliyev on Granting the Presidential Scholarship to Students Admitted to Higher Educational Institutions in academic year 2015/2016, as of September 14, 2015.

Elmar Gasimov wished all those granted with the Presidential scholarship continued success in their future activities. He emphasized that BHOS management take all necessary steps to provide constant support to all students to help them attain new achievement in their study, work and life. Elmar Gasimov noted that those representatives of the Azerbaijani youth who chose to study at BHOS could be justifiably proud of their choice. He also said that their entrance to BHOS is an important event for the Higher Oil School, too. The Rector wished the students to be persistent in pursuing new knowledge and skills and try hard to achieve success in their studies.

It shall be noted that there were in total 25 students who were admitted to the higher schools in the First Group specialty with marks between 685 and 700 points and awarded with the Presidential Scholarship and 17 of them chose BHOS. Only two persons admitted to higher educational facilities in the First Group specialty managed to gain 700 points and both of them selected to study at BHOS.