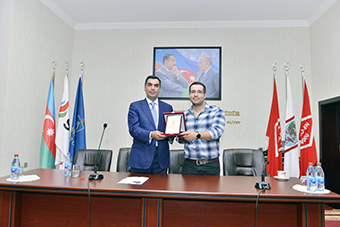 Opening the workshop, BHOS Rector Elmar Gasimov introduced Teymur Sadikhov to the participants and expressed his confidence that this event would be of a great interest to the students. He emphasized that meetings with young talented scientists, researchers and academicians are very important for the students in terms of their more effective study and their professional development.

In his address, Teymur Sadikhov covered subjects such as self-driving cars, multi-robot systems and air and hotel robots. Speaking about key factors contributing to someone’s success in his or her profession, he said that, in addition to voracious studying and obtaining deep knowledge, it is also very important to love a chosen field of activity and dedicate time and efforts to the work in order to succeed.

During the workshop, the participants discussed many topics. Then Teymur Sadikhov answered numerous questions from students.

Dr. Teymur Sadikhov is a Senior Vehicle Intelligence Engineer at the Mercedes-Benz Research & Development North America, Inc, in Sunnyvale, California, where he is working on control, planning and decision making for autonomous (self-driving) cars.

Dr. Sadikhov was born in Baku, Azerbaijan. He received his B.S. degree in Aeronautical Engineering from Istanbul Technical University in 2008, where he was the only student in the university’s history to graduate with a 4.00 GPA. He was the recipient of numerous awards during his undergraduate education including the BP, ITU Foundation, Nippon Foundation, and the Azerbaijani and Turkish government scholarship awards.

Dr. Sadikhov received the M.S. degree in Engineering Sciences (Mechanical Engineering option) from the University of California, San Diego, in 2010. He received his M.S. degree in Mathematics and Ph.D. degree in Aerospace Engineering from Georgia Institute of Technology in 2015. His Ph.D. research was supported by the U.S. Air Force Office of Scientific Research and NASA Dryden Flight Research Center.

During summer of 2013, he was a visiting researcher with the Autonomous and Intelligent Robotics Laboratory at the United Technologies Research Center, where he worked on trajectory planning for autonomous helicopters. From 2014 to 2015, he was a researcher with the Robotic Systems Estimation, Decision, and Control group at the NASA Jet Propulsion Laboratory in Pasadena, California, where he worked on localization and multi-vehicle path planning for autonomous ground vehicles.