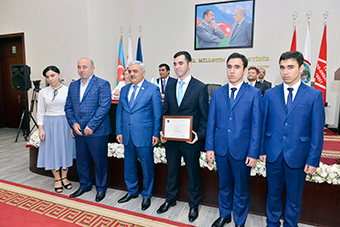 While congratulating the students also for winning the Presidential scholarship envisaged for students admitted to the higher educational institutions for the Academic year 2016-2017 by the order of the President of Azerbaijan Republic on granting Presidential Scholarship, SOCAR president wished them every success. In addition Rovnag Abdullayev congratulated the elder brother of the mentioned twins BHOS four year student from petroleum engineering specialization Rashad Abdullayev as he was awarded the title of ‘Student of the Year’ on the part of Heriot Watt University, UK, for his excellent performance during the academic year 2015-2016.

It should be reminded that during the entrance examination held this for higher educational institutions two brothers Nurlan Nazaraliyev scored 685 points and Ravan Nazaraliyev scored 700 points and selected process automation engineering of BHOS.  Elder brother of twins Rashad Nazaraliyev is studying petroleum engineering specialization progarmme of BHOS. He is four-year student. He scored 677 to be admitted to BHOS. Thus, three brothers are students of BHOS