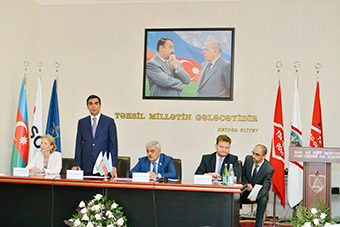 Baku Higher Oil School (BHOS) held a ceremonious event on the occasion of the start of academic year 2016/2017. Rovnag Abdullayev, MP and the President of SOCAR, Gordon Birrell, BP Regional President for Azerbaijan, Georgia and Turkey, Dr. Carole Crofts, the UK Ambassador to Azerbaijan, as well as vise-presidents and managerial staff of SOCAR, the directors of various national and international companies attended the ceremony together with the BHOS faculty, students and their parents.  Before the opening, the guests paid tribute to the memory of the National Leader Haydar Aliyev laying flowers at his bust located in the school building.

Opening the ceremony Elmar Gasimov, Rector of BHOS welcomed the guests and expressed his honor of meeting them at the ceremony. He extended his wishes of congratulation to the students admitted to BHOS with high scores, as well as to their parents on the occasion of the beginning of the new academic year. Briefing on the achievements and implemented activities within a short period of time, as well as the perspectives, the Rector said that this academic year the average entrance score to BHOS in specialization group No.1 constituted a total of 667 points. He also underlined that two students with the maximum entrance score of 700 points selected BHOS. Emphasizing the decree on establishment of BHOS issued by Ilham Aliyev, the President of the Republic of Azerbaijan,  Rector Gasimov said that the higher school was a model demonstrating the realization of the motto “We have to transform our oil capital to the development of human resources” in practice. The Rector also extended his sincere congratulations to all Azerbaijani oil workers on the occasion of the forthcoming National Oil Workers Day celebrated on September 20th based on the National Leader Haydar Aliyev’s relevant decree and expressed his strong belief in further contributions to this sector by the BHOS students. He also said that a total of 18 students admitted to BHOS this academic year had been awarded the Presidential Scholarship.

Taking the floor, the SOCAR President Rovnag Abdullayev congratulated the BHOS staff, students and their parents on the occasion of the beginning of the new academic year. He said that within a short time a wide range of measures have been implemented to ensure the development of the infrastructure and highly qualified human resources of the school established according to the Presidential decree, which resulted in great success.                Mr. Abdullayev expressed his strong belief in continuation and further expansion of these activities in academic year 2016/2017, while calling the students to take a more active part in this process.  He congratulated the freshmen and their parents.

Then the BP Regional President Gordon Birrell took the floor and extended his pleasure of the existing relations and partnership between BP and BHOS. He highly appreciated the school’s role in development of highly qualified young specialists saying that annually the BHOS students successfully participate in various projects implemented by BP.  He added that BHOS was the most active higher education institution collaborating with BP and congratulated the students wishing them success in their further studies.

In her speech, the UK Ambassador Dr.Crofts wished success to the students and called them to work hard to make new achievements in their studies.

Later, Ravan Nazaraliyev, a freshman admitted to the Process Automation Engineering programme scoring the maximum 700 points, took the floor and expressed his joy and honor of joining the BHOS students. He said he used to dream a lot of being able to be admitted to this school and was very glad that his wish came true. He expressed his gratitude to President Ilham Aliyev for the opportunities created at BHOS with the view of ensuring high quality education.

In his speech, Entoni-Mario Suares, the citizen of Georgia and the first international student admitted to Petroleum Engineering faculty, said that he selected BHOS for its international status and was happy to begin his studies at this school.

Then, Elshan Mikayilov, a senior Process Automation Engineering student and the winner of BP’s Techno Fest competition, spoke about the measures taken at BHOS to ensure high quality education and social opportunities for students underlining the faculty’s contribution in his success which was achieved based on the opportunities available at BHOS. Thanking the management of SOCAR and BHOS, as well as his professors Elshan called the freshmen to benefit from the opportunities provided by the school for students.

Later the floor was given to Rauf Nazaraliyev, the father of BHOS senior student Rashad Nazaraliyev, as well as his tween brothers Ravan (entrance score 700 points) and Nurlan (entrance score 685 points), who spoke on behalf of the parents and expressed his great joy and pride of the fact that his sons managed to join the students of BHOS. Extending his pleasure of the opportunities created for students to develop as highly qualified specialists, Mr. Nazaraliyev wished great success to all the students admitted to the higher school this year and expressed his gratitude to President Aliyev for the provided opportunities and successful educational reforms thanking the management of SOCAR and BHOS on behalf of his family members.

At the end of the ceremony the guests presented the newly admitted students their student cards and notebooks on behalf of SOCAR.