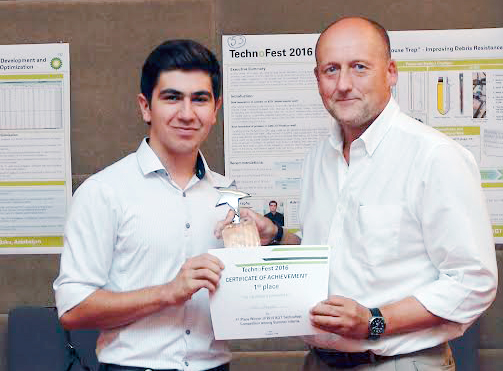 Elshan Mikayilov was born in 1996 Goychay region. In 2002 he started his secondary education at school of Gizilagaj village of Goychay. During school years he got the award as the best student of the year two times. After finishing school in 2013 Elshan scored 682 points during the entrance examination and he was admitted to study in process automation engineering programme at BHOS. He also won Presidential scholarship.

Elshan has always been active in intellectual contests, workshops and training ever held at the higher school. As a member of ‘Moon Walkers’ team he became the runner-up of ‘First Robotics Contest’ held in 2016 at BHOS.

It should be reminded that last year BHOS fourth year student from petroleum engineering Fidan Salimzade while taking internship at BP between September 2-10 got involved in ‘Texno Fest 2015’ contest and won the first place.

BP’s annual ‘Texno Fest’ contest is a global one supporting innovation related ideas in the technical field. BP annually organizes ‘Texno Fest’ contest for everyone willing to work for BP and take internship at the company including students. Every year young engineers enjoy the opportunity to make their presentations sharing their experience and outcomes.