Head of Public Relations Departament of BHOS has been awarded 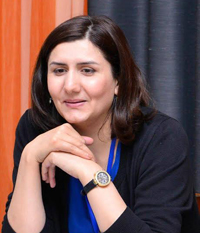 Zeynab Kazimova, head of Public Relations Departament of Baku Higher Oil School has been awarded with the diploma of "the best public relations of 2014" in result of the social survey.

Additionally, the head of the public relations of BSU and ADA University were the amongst of the rewarded ones.