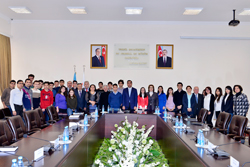 Meeting, attended by the parents of both of the students, was held at BHOS. At the meeting, Mr. Elmar Gasimov, the Rector of Baku Higher Oil School, considered the case as the “fruits” of the successful international cooperation of BHOS, that is, Aida Soltanova and Kamran Aliyev will study under the collaboration agreement made between BHOS and Heriot-Watt University. He stated that as a result of the governmental policy in and special care provided by the President of Republic of Azerbaijan, Ilham Aliyev to the education, Baku Higher Oil School had provided vast opportunities for Azerbaijani youth. He also said that after one semester the students would return to BHOS to complete their education. Mr. Gasimov emphasized the fact that it was the first time BHOS had sent its students to study abroad where they would have a unique opportunity to get acquainted with the history, culture, geography and traditions of that country. He said that BHOS would make tradition of sending some students abroad to be trained in various relevant specialties each year. He expressed his confidence that in addition to demonstrating good knowledge and skills, these students would also honorably represent both BHOS and the national flag of Azerbaijan in other world countries.

After that Aida Soltanova and Kamran Aliyev made a speech thanking both Mr. Elmar Gasimov and BHOS teaching staff for providing these opportunities to them. They appreciated the efforts made by professional BHOS teachers to support them in succeeding. They also promised to honorably represent Azerbaijan and BHOS in Great Britain.

The parents of the students spoke about the special care provided by the President Ilham Aliyev to the education and expressed their gratitude to Rovnag Abdullayev, President of SOCAR, Elmar Gasimov, Rector of Baku Higher Oil School and BHOS teaching staff for providing such opportunity to their children.

It should be mentioned that both the students have attended the foundation program to improve their English and completed it successfully. Studying at this university, they will get a chance to get familiar with UK study processes and programs deeply that will help them broaden their horizon and acquire theoretical and practical knowledge. During the semester students will get monthly scholarship. The students will study till May 22.