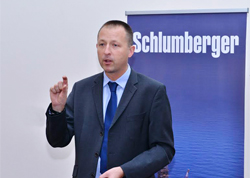 On November 6, 2014, Baku Higher Oil School (BHOS) and Schlumberger Logelco Inc. held a ceremony to sign an Agreement of Collaboration.

Making an opening speech at the event, Elmar Gasimov, the Rector of BHOS, emphasized the oil strategy which was successfully implemented by Ilham Aliyev, the President of the Republic of Azerbaijan, and said that Azerbaijan was the first country to produce oil using the industrial method, and petrochemical and gas industries played a key role in the growth of the national economy. According to him, training highly qualified specialists demanded in the labor market is an important aspect of the SOCAR’s activity. Speaking about the international projects implemented by SOCAR both in Azerbaijan and overseas, Mr. Gasimov said that the main goal of BHOS, a higher education institution established within the structure of SOCAR, was to train highly skilled English speaking specialists in line with modern standards by applying contemporary training technologies complying in Azerbaijan and increasing the level of knowledge in various branches of science, particularly, in consideration of the fact that SOCAR had already become a transnational company expanding its operation across the border. He also provided detailed information about the history of BHOS, its prospects and perspectives, as well as the application of modern technologies in training of specialists in Petroleum Engineering and Chemical Engineering programmes based on the curriculum of Heriot-Watt University, UK. He emphasized the growing number of Presidential Scholarship holders, from 11 students in 2012, to 15 students in 2013 and to 17 students in 2014. He also mentioned the new BHOS campus, the largest one in the Caucasus region, which is under construction and would be functional in the following academic year.

Mr. William Grace, General Manager of Schlumberger Logelco Inc. in Azerbaijan, expressed his satisfaction with being at BHOS, which, despite being established 3 years ago, became a top-ranked school in the national rankings and said that Schlumberger was one of the largest oil and gas field service providers operating in over 85 countries and cooperating with big companies to provide drilling and output solutions to optimized customer performance. Mr. Grace said that Schlumberger also attached importance to the provision of adequate human resources and demonstrated willingness to be part of the efforts to train engineers in line with international standards for the oil and gas sector of Azerbaijan.

During the event, Mr. Grace made a presentation outlining 3 basic areas (Drilling, Production and Reservoir Characteristics) in which Schlumberger was specialized.