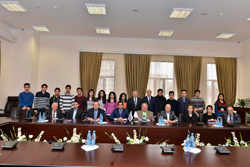 Welcoming the guests, Elmar Gasimov, Rector of Baku Higher Oil School (BHOS), emphasized that Azerbaijan’s renowned scientists represent country in many foreign companies, adding the importance of involvement in the training processes of young local engineers of those who not only employed in the industry but also do research. He invited Halliburton engineers to begin their scientific research and train specialists at Baku Higher Oil School (BHOS) within the framework of the mutual cooperation program. Expressing satisfaction with the progress of the mutual cooperation which was made in early April, Mr. Gasimov said that the selected BHOS students had gained efficient knowledge and skills by having their paid summer internship program in Halliburton, which helped to grow as a personality, as a specialist and manager, and enabled them to gain deep understanding of all the necessary disciplinary rules as well as the practical and technical aspects of this trade.

Randy Gilchrist and the rest "Halliburton" representatives, Directional Drilling Coordinators Salahaddin Ayyubov and Teymur Aliyev, and Ravan Ravanov, Business Development Manager for Azerbaijan and Georgia, were informed about BHOS Campus, which was under construction and would be run from the following academic year as of the largest one in the Caucasus Region.

Mr. Randy Gilchrist thanked BHOS management on behalf of Halliburton for successful cooperation and appreciated the idea of the involvement of Halliburton experts in the teaching process of students BHOS and ensured to support in this regard.

Meeting was followed by Q&A session with making the shortlist of the active students for the following internship program.