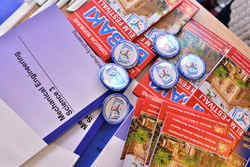 The festival was attended by BHOS administrative staff, faculty and students as well as the professors and teachers representing other higher educational institutions.

The festival began with the presentation on The Tools for Treatment of Water Surface Contaminated with Oil and Oil Products, by Prof. Karam Shikhaliyev, Doctor of Medicine, representing State Oil Academy of Azerbaijan. The presentation included detailed information about the scientific and practical achievements in recycling of polymers and inorganic substances, as well as the technologies applied in producing artificial oil from expired polymers.

Mr.Yusif Abdullayev, Head of Chemical Engineering Department of Qafqaz University, made a presentation on Cost-Effective and Efficient Way of Producing Hydrocarbons from Sea Water. He also gave information about the device, which he had invented to produce alternative energy from sea water.

The event continued with BHOS representatives’ presentations on Modern Methods of Teaching Mathematics for Engineers by Khanim Jafarova, PhD in Physics and Mathematics and on Geological Structure and Structural-Tectonic Characteristics of Nakhchevan -Araz Tectonic Zone by Oktay Rzayev, PhD in Geology and Mineralogy.

The presentations were followed by the Q&A session.

Moderator Ramiz Humbatov, BHOS Vice-Rector for Training, Science and International Relations, underlined that the mission of the festival was to raise the public awareness about the latest and internationally recognized scientific and technological innovations of the national scientists, and that this mission had been successfully implemented at BHOS. He thanked the attendees and supporters for assisting in the organization of this important event.

It is worth to note that Baku Science Festival 2014, the first festival of its kind in Azerbaijan, is organized by the National Academy of Sciences of Azerbaijan Republic (NASAR) and supported by Baku Executive Power and the Ministry of Education. The Festival is held at various educational institutions and its primary goal is to facilitate integration of the science and society and increase the interest of the young generations in science.