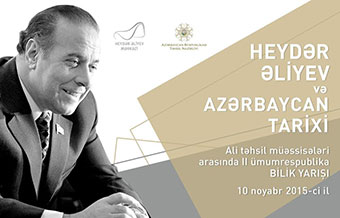 Eight students of Baku Higher Oil School (BHOS) participated in III national Knowledge Contest entitled Heydar Aliyev and History of Azerbaijan. The contest organized by the Heydar Aliyev Centre with support of the Ministry of Education of the Azerbaijan Republic took place at the Heydar Aliyev Centre on November 8. The main purpose of the event was to promote deeper studying the life and activities of the national leader of Azerbaijani people by young generation, raise their awareness of the great leader’s political and spiritual heritage, and draw Azerbaijani youth’s interest to science and scientific activities.

Three tours were arranged during the national Knowledge Contest entitled Heydar Aliyev and History of Azerbaijan. The contest winners were selected based on the tours’ results. In total, teams from 42 higher education institutions of the country participated in the contest. The BHOS team took 13th place in the contest.

It shall be noted that in the course of preparations for the Knowledge Contest, visits to the Heydar Aliyev Centre were arranged for all participating teams from October 31 through November 5.