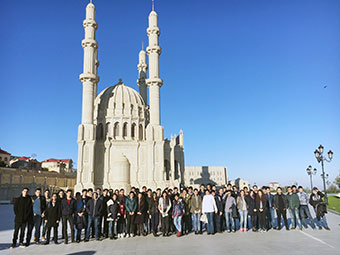 Students of Baku Higher Oil School visited Heydar Mosque. During their visit, they were provided with detailed information about the Heydar mosque, which is the biggest mosque in Azerbaijan and a multicultural center.

Construction works commenced in September 2012 upon a relevant Decree issued by the President of the Azerbaijan Republic Ilham Aliyev on the construction of this mosque.

In two and a half years, a great piece of architecture was created. Front of the building is decorated with a special stonework in the manner of Shirvan-Absheron architecture, while the whole mosque is built in an ancient Azerbaijani architectural style. It has four 95m-height minarets, 55m-height main dome and 35m-height second dome. Exterior of both domes are inscribed with Quranic ayats (verses).

Speaking at the opening ceremony of the mosque in December 2014, the President Ilham Aliyev, in particular, said: “This mosque is named after great leader Heydar Aliyev. And this is natural. Heydar Aliyev was a great personality. He served the people of Azerbaijan with dignity at all times. Under his leadership, Azerbaijan became one of the leading republics.”

It shall be added that this and other similar initiatives organized for BHOS students help shape their worldview, promote the students’ patriotic education and raise their awareness of the state ideology.