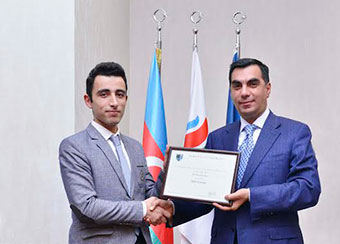 Fifth-year student of Baku Higher Oil School (BHOS) Rafael Samedov specializing in Chemical Engineering was awarded with a prize by Heriot-Watt University, Great Britain. He received a certificate and a cash bonus in an amount of 100-pound sterling for his excellent marks in the 2015-2016 academic year. BHOS Rector Elmar Gasimov congratulated Rafael Samedov and wished him new success in his study. He also emphasized that BHOS’ reputation should be always maintained at high level.

Despite the fact that he is still a student, Rafael Samedov assistis BHOS professors in conducting laboratory practical lessons. He is the only BHOS student who was awarded twice as the best student of the Heriot-Watt University\s course on the Chemical Engineering specialty. Rafael Samedov often participates in the scientific conferences and presents speeches. His research interests lay in the field of renewable energy sources.