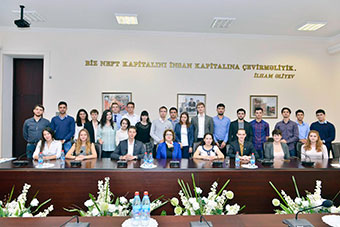 By the invitation of SPE (Society of Petroleum Engineers) Student Chapter of Baku Higher Oil School (BHOS), a group from the Gubkin University SPE Student Chapter visited Baku. The trip of ten students of the Gubkin Russian State University of Oil and Gas (National Research University) to Baku was arranged at the initiative of Fahmin Husuzadeh, BHOS student and a member of BHOS’ SPE Student Chapter, with support provided by the Higher School and SPE’s Azerbaijani branch.

During their stay in the capital of Azerbaijan, the guests met with SOCAR President Rovnag Abdullayev and BHOS Rector Elmar Gasimov.

At BP-Azerbaijan office, the students participated in technical presentations session led by Elshan Rzayev, BP-Azerbaijan’s Petrophysics Discipline Lead and Chairperson of the Student Chapter of the SPE’s Azerbaijani branch. At the session, the participants discussed their experience in studying petroleum engineering related disciplines and presented technical projects. The presentations were made by Fidan Salim-zade and Gurban Orujov from BHOS and by Aygul Ayupova, Dmitriy Koshechkin and Kirill Spivak from the Gubkin University.

At a round table discussion between BHOS’ and Gubkin University SPE Student Chapter held at the Baku Higher Oil School, the students informed each other about their student organizations’ activities and discussed further cooperation opportunities including student exchange programs. At the end of the meeting, representatives of the BHOS’ SPE Student Chapter received an official invitation to participate in the VIII International Youth Scientific and Practical Congress "Oil and Gas Horizons" to be held at the Gubkin University in November in Moscow.