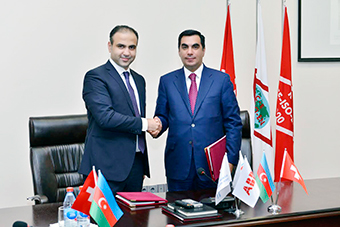 A Cooperation Agreement between Baku Higher Oil School (BHOS) and ABB company was signed at BHOS. Opening the agreement signing ceremony, BHOS Rector Elmar Gasimov told about development and enhancement of BHOS cooperation with various international organizations. He said that BHOS’ new campus, which was built up to the highest modern requirements, would be equipped with laboratories and scientific centers by the companies cooperating with BHOS. Rector also informed that every year BHOS students undertake internships at those companies, including SOCAR’s facilities.

Elmar Gasimov emphasized that constantly expanding cooperation between BHOS and many international and national companies operating in the oil and gas sector, chemical industry and automation engineering not only helps to educate BHOS students as high-qualified professionals, but also plays an instrumental role in their future recruitment and career development.

Having expressed his satisfaction with the meeting at BHOS, Head of ABB representative office in Azerbaijan Rustam Gasimov pointed out that close partnership relations between the company and BHOS are successfully developing.

Then the Cooperation Agreement between the Baku Higher Oil School and ABB company was signed.

ABB was established in 1988 and is headquartered in Zürich, Switzerland. It is operating mainly in robotics and the power and automation technology areas. ABB has operations in around 100 countries, with approximately 145,000 employees.