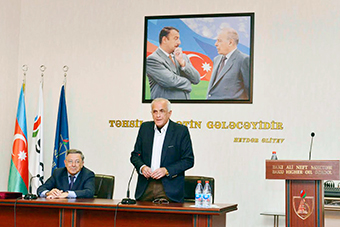 A meeting of academic staff and students of Baku Higher Oil School (BHOS) with People’s Artist of Azerbaijan Fuad Poladov was held at BHOS in the framework of the entitled Meeting with Masters of Arts and implemented by the “Knowledge” Foundation under the President of the Azerbaijan Republic.

Greeting the attendants, BHOS Vice-Rector for Training, Science and International Relations Ramiz Humbatov informed them about the most important milestones in Fuad Poladov’s biography and acting career. He said that he liked Poladov’s works from the very day when he saw the actor in the Investigation Continues movie. Ramiz Humbatov also reminded that Fuad Poladov received the title of the People’s Artist of Azerbaijan in 1986, when he was 38 year old, and said that the actor’s name is legendary for national theatre and cinema. He expressed his hope that this meeting would encourage the students to learn more about the artist and they would watch more movies with his participation.

In his speech. Fuad Poladov greeted BHOS teachers and students and emphasized that such an event is both a great responsibility and a great honor for him. “I often meet with young people, and one of the important objectives of such meetings is to raise youth’s interest in the theatre art. As Ataturk was saying, theatre is a mirror of cultural level of a country,” said Fuad Poladov.

The famous actor told about his youth, studentship, and his evolvement as an artist as well as about main milestones of theatre and cinema arts’ development in Azerbaijan. He also recalled stories happening during making films including some interesting and funny ones. He said that prefers work in the theatre to the work in the movies. “While on the scene, an actor always feels the audience’s energy. And if the spectator sees a false play, he will never go to the theatre again,” said Fuad Poladov. He recited a poem by famous Azerbaijani poet Vagif Samedoglu, whose works he likes very much. He also pointed out that arts in general and theatre in particular play a vital role the intellectual development of youth.

In appreciation of the artist’s love of poetry, BHOS student Nazperi Isfandiyarzada specializing in Chemical Engineering recited a poem by Ramiz Rovshan, Poladov’s another favorite poet. Then the actor answered numerous questions from the BHOS teachers and students. At the end of the meeting, on behalf of the attendants BHOS Vice-Rector for Training, Science and International Relations Ramiz Humbatov expressed his gratitude to Fuad Poladov for the interesting meeting and presented him a memorable gift.