Teymur Sadikhov: I am delighted with Baku Higher Oil School. 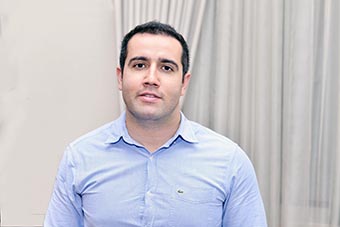 - Teymur, what is the purpose of your visit to Azerbaijan?

- I came at the invitation of the Ministry of Defence Industry of the Azerbaijan Republic to conduct a workshop, which was organized within Azerbaijan International Defence Exhibition ADEX 2016 held in Baku. During my stay in Baku, I also conducted a series of other workshops including a workshop for the students of the Baku Higher Oil School and another one for students of the ADA University.

I was surprised to see full audience at all those workshops. I could not anticipate that there was such a strong interest towards robotics technology in Azerbaijan. This interest to science and technology is an important sign. New generation has a great potential which shall be effectively developed.

- At the workshop conducted by you at Baku Higher Oil School, the BHOS Rector Elmar Gasimov noted that he had known you for 10 years. What does this mean for you?

- Yes, indeed, we first met in 2003, when I entered a Turkish university. At that time, Elmar Gasimov was a Deputy Minister of the Azerbaijan Republic. He strongly supported me in my intention to continue my education abroad. No wonder I was very pleased to meet him again…

- What are prospects and trends of the artificial intellect development in the future? What are its advantages and challenges?

- Artificial intellect has a great potential. Now robots can perform all monotonous, unskilled and boring work instead of people. However, it does not mean that people will be jobless. The aim of the artificial intellect technologies is to ensure safety and reduce fatality cases. For example, a car driver who is either drunk or very tired puts people around him in a jeopardy. In this case, autonomous transportation vehicle can ensure road accident reduction by excluding human factor, which is a common case of road traffic incidents.

- Currently, you are working at the Mercedes-Benz Research & Development North America, Inc, in the state of California. Google-X company, which is developing various innovative technologies including driverless cars, is also located in this state. Have you received a job offer from them, too?

- It happened that both companies made me a job offer simultaneously. Opportunity to work for Mercedes-Benz looked more attractive for me, so I preferred this company to Google-X, which also develops robotics technologies and receives significant investments. However, I am not so much interested in the company itself, as in the project I would like to work on.

- Do you think of returning home yet?

- I do not have plans to come back now. At the same time, if large investments are made in this field, my team, my friends, colleagues and I are ready to get down to business. I shall note, though, that only small-scale projects can be implemented today. Large-scale projects can be developed after a solid base is created.