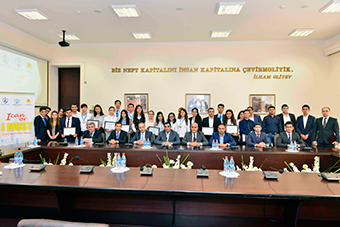 Results of the project entitled “I can or I must” and implemented by third-year Process Automation Engineering student of the Baku Higher Oil School (BHOS) Pakiza Pashayeva were presented at a meeting at BHOS. The event was organized jointly by BHOS, Binagadi District Executive Power Office, Youth Union of the district branch of “Yeni Azerbaijan” Party and Department of Youth and Sports of the Binagadi district. Executive Director of the “Knowledge” Foundation under the President of the Azerbaijan Republic Oqtay Samedov, Chairman of Youth Union of “Yeni Azerbaijan” Party Seymur Orudjov, Deputy Head of Information Resources and Technology Office under the National Assembly Yashar Amashov, Head of the Youth and Sports Department of Binagadi district Gudsi Bayramov, Editor-in-Chief of the Iki Sahil newspaper Vugar Rahimzadeh, BHOS management and students participating in the project attended the event.

In his opening speech, Rector of the Baku Higher Oil School Elmar Gasimov welcomed the guests and told about the school successful activities and prospects of BHOS development. Rector also informed about construction of the BHOS new campus, which is nearly ready. He noted that all necessary conditions are created in the new campus for training of highly qualified specialists for oil and gas industry. Rector Elmar Gasimov underlined that within a short period of time BHOS managed to become one of the most reputable and advanced higher education schools in the country. He also emphasized that the BHOS management would always support students’ initiatives and interesting projects.

In her speech, the initiator of the «I can or I must» project Pakiza Pashayeva briefed the guests about the project and its objectives and emphasized the importance of political, social, economic and legal framework for full development of the youth. She expressed her gratitude to BHOS management for their commitment to constant support of the students’ initiatives.

Executive Director of the “Knowledge” Foundation under the President of the Azerbaijan Republic Oqtay Samedov expressed his confidence that of the BHOS graduates would become managers and leading specialists in large international companies and organizations. Editor-in-Chief of the Iki Sahil newspaper Vugar Rahimzadeh noted that Youth Policy is an integral part of the national state policy. He stressed out that BHOS is one of the most prestigious higher education schools in the country and highly praised Pakiza Pashayeva’s choice to study at BHOS.

Other speakers told about success of the national Youth Policy implemented by the President of the Azerbaijan Republic Ilham Aliyev, the role played by Azerbaijani Youth in national political life. They also emphasized importance of learning English language for professional development and career. The meeting participants exchanged their views on their expectations of the project.

Pakiza’s father Alladin Pashayev also participated in the meeting. He expressed his gratitude to BHOS management for the constant support to the students and for the conditions created at the Higher School for their professional growth. At the end of the ceremony, the honorable guests presented medals and certificates to the project’s winners and participants.

The «I can or I must» was implemented within three months. Its major objective was to create more opportunities for studying English language using more effective and intensive methods, as good knowledge of English plays an important role in professional career and growth. Within the project implementation, film shows of movies in English language and conversation clubs were held at the premises of the Binagadi district branch of the “Yeni Azerbaijan” Party, and tours to the city were arranged.

Significant contribution to, and support for, the project implementation was provided by Senior Lecturer of the BHOS’ English language and Humanitarian Disciplines Centre Asif Gojayev.