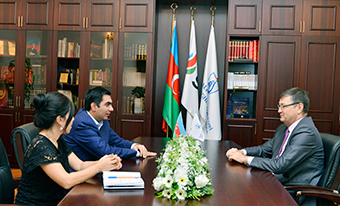 Rector of the Baku Higher Oil School (BHOS) Elmar Gasimov received Director of the International Permanent Secretariat of the Black Sea Universities Network (BSUN) professor Eden Mamut. Elmar Gasimov greeted the guest and expressed his satisfaction with the meeting. He noted that BHOS is a member of BSUN since 2013 and told Eden Mamut about activity of the Higher school.

Speaking about the BHOS activity and reforms implemented within a short period of time, Elmar Gasimov informed the guest about teaching process at the BHOS, conditions created for students and the school’s international contacts. He also told about measures taken for establishing, strengthening and widening BHOS’ cooperation with various higher educational facilities around the world including organizations and associations. The Rector expressed his confidence that close and successful cooperation between BHOS and BSUN will continue developing in the future.

In his turn, the Director of the International Permanent Secretariat of the Black Sea Universities Network professor Eden Mamut expressed his sincere gratitude for the meeting. He said that BSUN is now comprised of more than 100 universities of the states of The Organization of the Black Sea Economic Cooperation (BSEC), namely Albania, Armenia, Azerbaijan, Bulgaria, Georgia, Greece, Moldova, Romania, Russia, Serbia, Turkey and Ukraine. Speaking about BSUN work on developing relations with universities for scientific cooperation, Eden MAmut also told about activities aimed at strengthening this cooperation and about its future prospects.

After the meeting, the guest was given a tour at the BHOS new campus. He also learned about its structure and conditions in details.