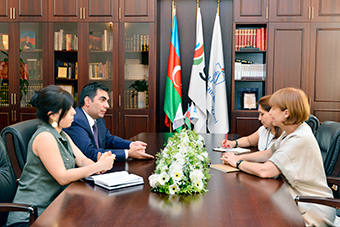 Baku Higher Oil School (BHOS) and British Council agreed upon expanding the bilateral partnership relations. Elmar Gasimov, Rector of BHOS had discussions about the potentials of widening the collaboration during the meeting with Elizabeth White, British Council Country Director for Azerbaijan.  Underlying that the cooperation between the two institutions were being continued at the highest level Mr.Gasimov said that annually the BHOS students demonstrated high results during the IELTS examinations administered by British Council while this year’s results were even higher, especially with Chemical Engineering student Fidan Guliyeva’s 8.5 band score which was the top one among the students.

Ms. White expressed her pleasure of the current relations with BHOS emphasizing the school’s distinguishing role among the national higher education institutions in terms of the collaboration with UK Universities.  She said that the partnership between BHOS and Herriot-Watt University had always been the focus of attention and British Council was committed to assist in establishing and developing further relations with UK institutions.