BHOS to cooperate with Angolan company 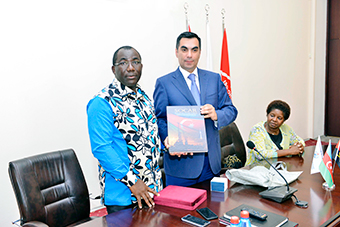 Welcoming the guests the Rector briefed on the higher school’s history, vision and mission, as well as its international relations. Emphasizing the importance of educational relations between the countries, Mr. Gasimov spoke about the measures taken to train highly qualified engineering specialists underlying the differences distinguishing BHOS from the other national higher educational institutions.  The Rector noted that the BHOS students took internship at various structures of SOCAR, as well as at the international companies operating in Azerbaijan. Underlining that BHOS had recently announced its international admission programme the Rector said that wide opportunities existed for foreign students to come and study at BHOS. Mr. Gasimov also said that BHOS increased its international collaboration and was interested in new partnership relations.

Mr. Domingos expressed his honor of visiting BHOS and thanked the Rector for the warm welcome. Noting that he had also studied in Azerbaijan Mr. Domingos said he was very pleased of coming to Baku again. “Almost twenty years passed and Baku became even more beautiful resembling a contemporary European city”, said Frederico Domingos.  He briefed on the company and the projects implemented in Angola and abroad, emphasizing the company’s interest in establishing partnership with BHOS and the potentials of collaboration with Sonangol Academy.

The speeches were followed by the Q&A session where the guests answered to the questions raised by the students.

At the end of the meeting, Mr. Domingos was presented the Honorary Guest Diploma on behalf of BHOS.