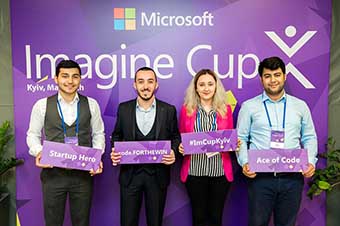 Team of Baku Higher Oil School (BHOS) entitled “Oilman” successfully participated and came second in the regional finals of Microsoft Imagine Cup 2017 in Kiev, Ukraine. The BHOS team including fourth-year Process Automation Engineering students Kerim Kerimov and Shamil Omarov, and fourth-year Petroleum Engineering student Lala Mamedova developed an application Jabda on the basis of Windows Azure, which is a cloud computing service. This software can be used for multiple purposes in various fields; for example, users of this application can choose their favorite music in restaurants, cafes, shopping centers and other public places. In the places where the system is installed, users of the Jabda system can upload songs and melodies from their mobile phones to existing collection and even vote for one or another track to move it up in the playlist. As the member of the jury Oleg Kudrenko says, BHOS students’ project looks very promising. In his words, if the team slightly modifies and finalizes the project, a huge market will be open for it.

Participants of the regional finals of Microsoft Imagine Cup 2017 in Kiev included student teams from seven countries; Azerbaijan, Belarus, Estonia, Georgia, Lithuania and Kazakhstan were represented by one team each, and three teams represented Ukraine. The Georgian team took a third place, and Azerbaijani team came second. Belarusian team won the semifinals and gained the right to participate in the Imagine Cup 2017 Worldwide Finals. It will take place in July 2017 in Seattle, USA, where teams from many countries will contend for the main prize in an amount of US$100,000 to be awarded for successful implementation of the winning project.

The educational project Scrawlless developed by Belarusian students for children with cerebral palsy and recognized as the best one at the regional finals in Kiev has no analogue in the world. Using this free mathematical web portal, schoolchildren with cerebral palsy can do their individual homework assignments in mathematics, while some of the portal tools can help them make drafts and perform calculations. The website was already tested with participation of 100 families having sick children and they all were happy with the results.