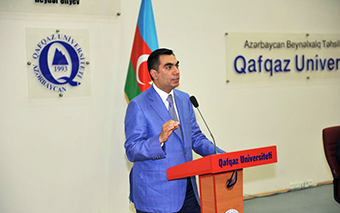 Khalik Mammadov, SOCAR Vice-President and Chairman of the International Education Centre Managerial Board, presented Elmar Gasimov, Rector of Baku Higher Oil School (BHOS) to the staff members of Qafqaz University recently placed under the management of BHOS. Mr. Mammadov said that the change in the management aimed at improving the effectiveness of the system. He extended his gratitude to Mr. Ahmet Sanich, former Rector of Qafqaz University, for his efforts and achievements during his 11-year tenure at the university wishing him success in his further professional activities. Mr. Mammadov emphasized that the system in the university would remain as it was developing even further. Mr. Mammadov also added that the faculties would continue functioning, while the student admission would be carried out.

Ex-Rector Ahmet Sanich made a speech for the staff members and extended his wishes of success to them, underlining his belief in further development of the University.